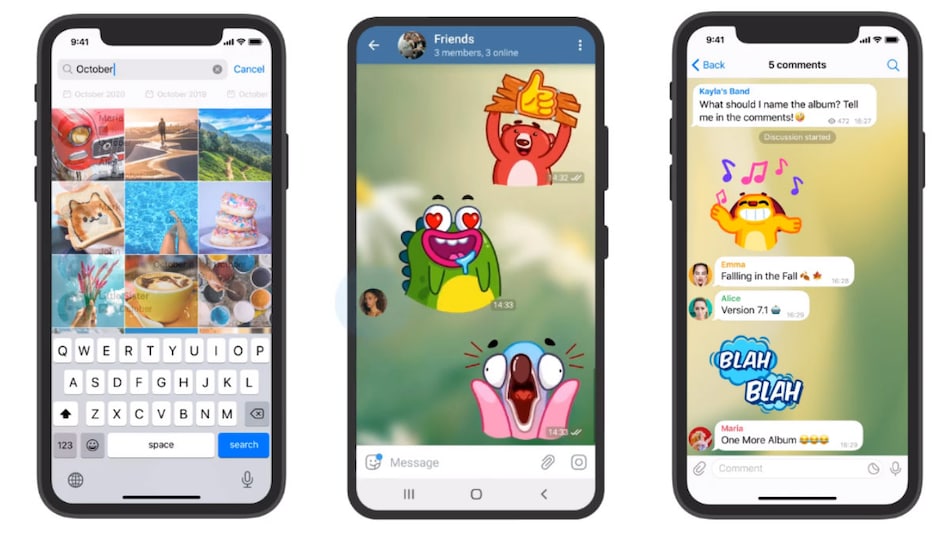 Telegram has introduced a slew of features, including Search Filters, Anonymous Group Admins, Channel Comments and more in its recent update. Search Filters will allow users to find memes on Telegram Cloud. The Anonymous Admins will keep the name and identity of the admins hidden in the list of group members. They just have to enable Batman mode to post as an anonymous admin in a group. The third new feature is Channel Comments to keep discussion in a group more civilised.

According to a blog post by Telegram, users will now be able to find media, links, files and other more easily with the new Search Filters. For example, in order to search links shared on a particular date, users can just type “August 14” or “Yesterday” and the app will return the results accordingly. Further, typing the name of any person, group, channel, or bot will add a filter by source, the company said. The filters will also allow users to search for something as specific like messages with a link, sent in August 2018, containing the word “happy”.

In order to keep admins of groups that are used to disseminate sensitive information. “Telegram is increasingly used to organise protests for democracy and freedom. Today we’re introducing another tool for safer protests,” the company said. To keep the identity hidden, admins can toggle Remain Anonymous in Admin rights to enable Batman mode. This mode allows the admins to keep their identity hidden from the group members in the list. The messages sent by the admins will be signed with the group name, similar to the one we see in channel posts.

Telegram has added a comment button to posts on channels with discussion groups. The comments by the members will show up in a thread of their own as well as in the discussion group “to keep everyone in the loop and make it easier for admins to keep the conversation civil.” Even if a person is not a member of the channel’s discussion group, they will be notified about replies on their comments via a new chat called Replies. To enable discussions in your own channel, head to Channel Settings > Discussion.

Furthermore, those who use multiple accounts in one app can now preview the chat lists of your both accounts using the account switcher. Telegram says it is also working to animate every emoji in existence.